It’s odd to start a post with a focus on Morocco’s Taste of Marrakesh outdoor kitchen.  Sadly, in my opinion, they’re most always a disappointment.

Take 2015, for example.  Their Harissa Chicken Kebab was dull and disappointing.  Going back one year further, however, that same dish was vibrant and delicious.  Which version will show up this year, Morocco? 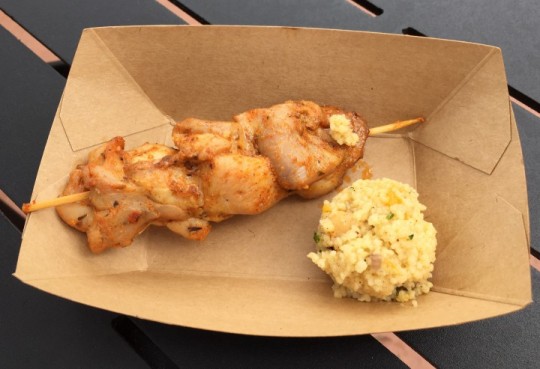 To be frank, my friends, I disliked Marrakesh’s Falafel Pocket so much that I don’t even remember trying it last year.  “Horrible.  Terrible.  Dry.  Pass it by!  Honestly, my friends, this dish was the epitome of ‘dry’. 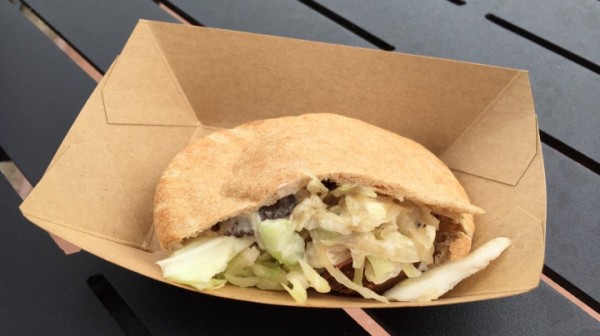 It was the only thing that I took one bite of and then discarded.  I do like chickpeas.  I do like pita bread.  I didn’t like this dish.  Sorry.”  Folks, my recommendation is to skip Morocco’s kitchen.

Consistently one of the single-best dishes served at “Food” & Garden, the Shrimp and Stone-ground Grits served at the Florida Fresh kiosk is a phenomenal creation.

Just the right amount of spice, it is a medley of deliciousness.  I very highly recommend that you sample this masterpiece – especially if you try just one item!

Florida is putting forth two additional, less exciting, items in 2016 – a Kale Salad and what they are calling a Florida Larder Board.  The salad speaks for itself, but the “board” is made up mainly of ricotta cheese, house-made pickles, and pâté.  I’ll pass on both.

The Fleur de Lys outdoor kitchen, located in France, of course, returns in 2016, and they’re bringing Pulled Duck Confit with them. 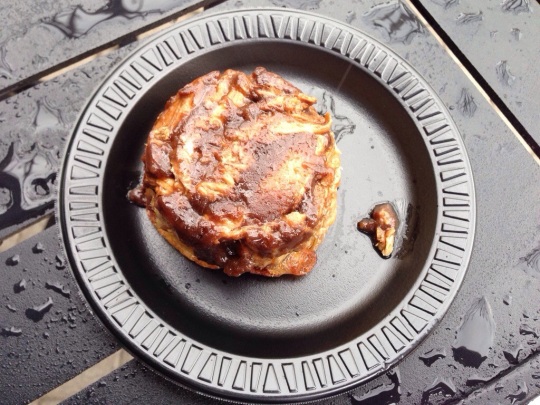 More popular than I personally think it should be, I’m sure a lot of “Food” & Garden faithful are rejoicing.

France’s other entree, this year, is an Alsatian Onion Tart.  This replaces their Parisian-style Dumplings.

I know one personal friend that will be sad to see that the dumplings have disappeared.  As for the tart?  I’ll pass.

When it comes to World Showcase’s United Kingdom and their “Food” & Garden efforts, they clearly suffer from an identity crisis.  They re-appear this year … under yet another new name!

In 2016, they call themselves Cider House.  Outstanding!  What are you serving, Cider House?  Well, their most-ordinary dish is a Land-harvested Field Greens.  Perfect.  Another salad.

I’m not going to lie.  This morsel is worth trying.  For me, however, I’ve recently come to the conclusion that the texture of smoked salmon is not my thing.

Mrs. All in WDW’s first reaction was, “Pear-brined?!  Yuck”!  Nonetheless, I’m intrigued.  Nothing mundane about this one … I hope!

That covers what’s left of the kitchens, folks.  Next up?  Check back in a few hours as I reveal the All in WDW 2016 “Food” & Garden Pre-Festival Top 10!  Stay tuned later today as the food pics start flowing!