You know me … I just can’t resist trying to catch unique shots of anything Walt Disney World!  For example, on a recent walk from Disney’s BoardWalk, I couldn’t pass on snapping this glimpse of Hollywood Studios. 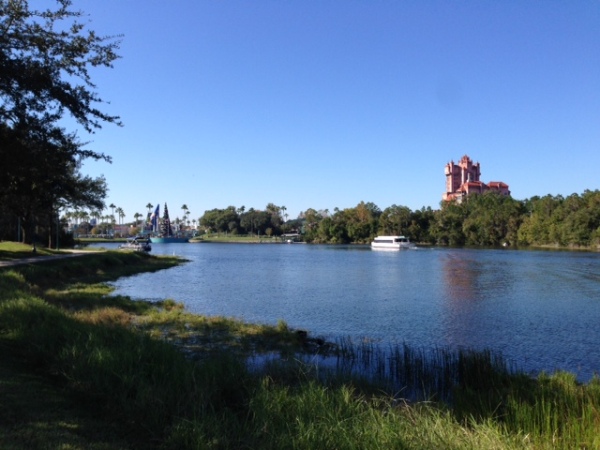 The Tower of Terror, the channel from Crescent Lake, a Friendship boat, the Studios’ Christmas tree?  See it?  Off to the left next to the Sorcerer’s Hat?  No?  Click on the picture and “blow it up”!  You’ll see …

… one of the best decorated and themed trees in Walt Disney World!  I just love the movie-frame border along the base.  Don’t you?

Sixteen days ago, two heavyweight fighters climbed into the ring to battle for Magic Kingdom supremacy.  After a late-round flurry of “punches”, The Mountain raised its fist in victory.  Meanwhile, The Mansion screamed fluke and demanded an immediate rematch.  Well, just two short weeks later, the Victorian Gothic manor …

END_OF_DOCUMENT_TOKEN_TO_BE_REPLACED

I’m compelled to start today’s post by showing just a little bit of love to those four attractions.  And, where I had some company – about 36% of you across the two groups voted for one of the four, to be exact – I feel a bit lonely.  I mean, I have to be in the vast minority of people who have no favorite left in the finale.  Hah, I feel like my NCAA bracket got completely busted after the first round of games!

Please bear with me for one minute … Illuminations is my ultimate favorite attraction because I find the majesty of the soundtrack in combination with the power of the fireworks display to be very uplifting.  And, the rumors that Disney is considering a “refurbishment” of the show causes me considerable sadness and distress.

The Rock ‘n’ Roller Coaster is the only ride I can (and have) gone on again and again and again.  In fact, one morning, my max was six times straight.  I wasn’t “quite right” for a few hours, but it was a blast!  There’s nothing like the rush of being launched into that tunnel and through that initial double-loop.  The only ride that comes close for me in thrills is Everest.

And, Kilimanjaro … I just love the zebras, giraffes, lions, and all their friends.  Sure, you get bumped and bruised along as you bounce through the safari, but it is a unique experience for any “zoo lover” out there.  I’m so sad.

OK, enough whining and complaining.  If the loss of Epcot in this competition is the biggest news from yesterday’s results, then the next biggest is that it only took two weeks for Haunted Mansion to get its much-needed, well-deserved, rematch with Splash Mountain.  Overwhelming winners of their respective 1st Round groups, those two behemoths have to battle each other one more time while also taking on the very best of Hollywood Studios and Animal Kingdom.  Who will climb to the top of the heap?

This is the culmination of “Championship Week”, fans!  What will our story be?  Will Splash do it one more time?  Was its upset victory over Mansion indeed a fluke?  Will Everest or Tower take the Magic Kingdom down?  I’m dying to find out … aren’t you?  Vote! Vote! Vote! Bring your friends!  Get them to vote too!

Have a Happy Saturday and enjoy!

The hoopla is about to begin. In more ways than one!

Mrs. All in WDW and I have seen two bus caravans arrive in the last few days and know that the Syracuse Orange and the Louisville Cardinals are staying at local hotels mere walking distance from our home. Yes, the NCAA festivities are about to start, and Atlanta is already alight with excitement.

To get a jump on the action, we, the All in WDW community, have finally arrived at THE day. We have been building up to it all week. It is time to elevate one of eight of the finest attractions in Walt Disney World to the All in WDW “pedestal” entitled Readers’ Favorite WDW Attraction. Which attraction – of the eight – will rule “The World”?

But, before we move on, how’d we do on yesterday’s trivia questions? Well, Splash ended up being a tougher ‘nut’ than I expected. The overwhelming response was “Laughing Place Landing”. In truth, I’ll refer to the WDW web site … “During your log-flume adventure, visit such whimsical watering holes amid Chick-A-Pin Hill as:

“Splash Mountain invites you to clap and sing to several classic Disney songs, including: Ev’rybody’s Got a Laughing Place“. Wikipedia helps out with, “Br’er Rabbit continues on his journey to find his ‘laughing place’.” All this to say that I made up the phrase “Laughing Place Landing”. Critter Cave was the correct choice.

When it comes to the infamous bride that ‘haunts the Magic Kingdom’s mansion’, the Bride has been altered several times over the years. However, she now appears at both Disneyland and Walt Disney World as Constance Hatchaway – the “Black Widow Bride”.

Enough of trivia! It’s time to get to business!

One thing I know about this poll before it even starts is that there is no combination of four attractions that won’t produce a 1st Round grouping full of controversy. I can hear it already, ‘Why’d Splash Mountain have to be put with Spaceship Earth?’ Or, something like that. Well, I think I have a fair and objective solution, my friends.

We spent the entire week taking on eight trivia questions – one for each contending attraction. The voter response total for each individual poll is how I seeded this impending competition. For example, the “champions” of each park were seeded as follows (trivia poll vote totals in parenthesis):

The second-place finishers for each park were, likewise, seeded:

Vote, vote, vote, my friends! Spread the word! This is your chance to determine just what is the All in WDW Readers’ Favorite WDW Attraction! Who will rule “The World”!

The Top 2 in each group advance to the finale!