If you remember, I reported, in print and on the WDW Main Street Podcast, that Epcot left their tasty Kimchi Dog off of South Korea’s 2015 menu.  A sad fact but true.

What I didn’t mention, at the time, was that Disney hid it elsewhere in World Showcase!  Really?  Where?

We have Dennis Conroy of the WDW Main Street Podcast to thank for this little discovery, by the way, folks.  Great job, Dennis!  Thanks!

Where ARE you, Kimchi Dog?

I have to confess, when I publish Food & Wine’s menus, I do take some editorial license.  Oh, I don’t change any of the detail, of course, but I do omit the mundane.

Do you see what I mean by “mundane”?  Why try these dishes when there’s so much more creativity to sample at World Showcase’s International marketplaces?

How about Refreshment Port?

Actually, I wish I would have read their menu further.  Otherwise, I wouldn’t have spent the last few weeks operating under the assumption that Epcot was going to deprive me of my “adult” Dole Whip this year. 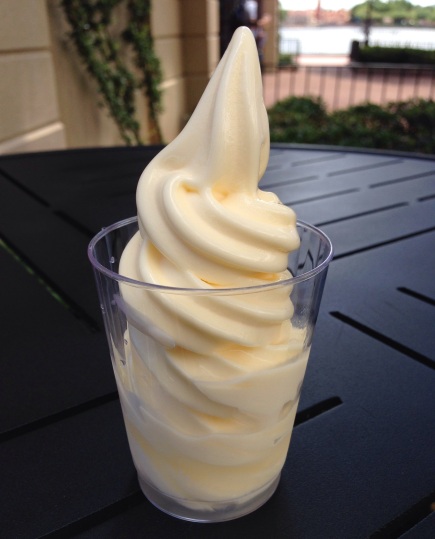 To “drink”, the Refreshment Port will be offering:

Of course, in my defense, I was looking for food.  Why would I look for “ice cream” on the drinks menu?!

The lesson, however?  Do a better job of reading all the menus, Bob.  For instance, I completely bypassed The Outpost.

You know where that is, yes?  The “pavilion that’s not a pavilion” between China and Germany?  No?  Just listen for the drums.  You’ll find it.

Anyway, this is what The Outpost has to say about 2015’s food-fest:

Get your fill of spicy hot dogs with kimchi slaw and Korean mustard or get your chill of frozen treats—whether an icy cold Mango Star featuring African Starr Rum to drink or a frozen “Brown Elephant.”