Happy Sunday, my friends!  Welcome to what I feel are my favorite posts of the year – the two-day unveiling of All in WDW’s final Food & Wine “menu”!

Yes, these are our recommendations for those of you who are lucky enough to get to attend Epcot’s big Fall “party”.  This is the 2016 All in WDW Food & Wine Festival FINAL Top 20!

I approached 2016’s food-fest from a bit of a different perspective this year.  How so?  My Pre-Festival menu was a collection evenly split between returning (veteran) dishes and new (rookie) items.

How’d they fare?  We’ll see the detail in a minute, but, in short, the vets still “rule the roost”.  In fact, three of the rookies didn’t even survive the final cut!  The good news, though?  Those three were replaced by three other new items.

They just weren’t good enough to beat out some of the other dishes we enjoyed much more.  And, what were those?  Well, let’s count ’em down.  Here is the FINAL Top 20!

Look back at my Flash Report and you’ll see that I was very vocal about the fact that I didn’t enjoy this dish.  On the WDW Main Street Podcast, I said that I was going to cancel it off my list entirely! 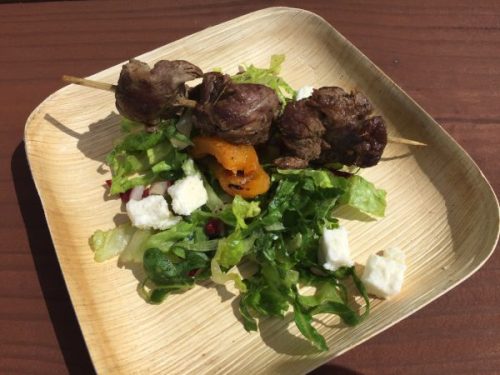 How does it make my Final 20, then?  I realize that I have to be reasonable.  First, it’s The Chew.  You’re going to want to try it.

Plus, its appearance is great and there’s two months of Festival to go.  Will they improve upon the serving I received.  Undoubtedly.

The bacon is the most-redeeming part of this recipe, I’m afraid.  In fact, I felt that the Mac, itself, was lacking in Cheese.

In addition, for my palate, the dish included way too many bread crumbs.  A wildly popular dish, I felt it needed to, at least, remain on my menu.  I know you’ll likely try it, as well.

If the pork was less over-done and tough, this item would have finished higher on my list.  It was a generous cut and well-designed dish. 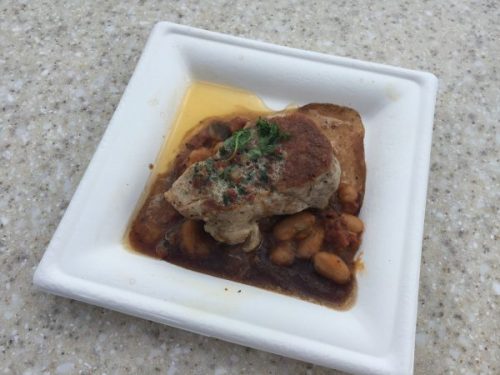 When the best part of a presentation is the side, however, its final “grade” has to reflect its performance.  Bean ragoût, yes.  Pork, not so much.

I’m really glad that Epcot has started presenting their Festival shrimp dishes without the tails.  It makes for a much more sanitary “sharing” experience, for one thing.

The only problem with this item, though, was its lack of “zing”.  Its flavor profile was pretty bland and uninteresting.  It needs to be more memorable, Japan.  Sorry.

An impressive serving size, Italy!  The last time I experienced one of your chicken recipes, you served up a little tenderloin.

This is the first of our “replacements”, by the way.  Not on my original Pre-Festival menu, this dish helps rescue us from the three aforementioned “cast-outs”.

Although the sauce was pretty ordinary, it was, all in all, a pretty worthy item.  I’d still like to see you bring back your Beef Bolognese Cheese Ravioli, Italy, but that’s another story.

Two years ago, Brazil served us a plate pulled from under a heat lamp.  It was mediocre, at best.  Last year, the dish they provided was freshly assembled.  It nearly “won” the Festival.  This year, we were back to the heat lamps.  Need I say more?

Another big “loser” in comparison to my expectations, Africa’s chicken entered the Festival ranked at #3. 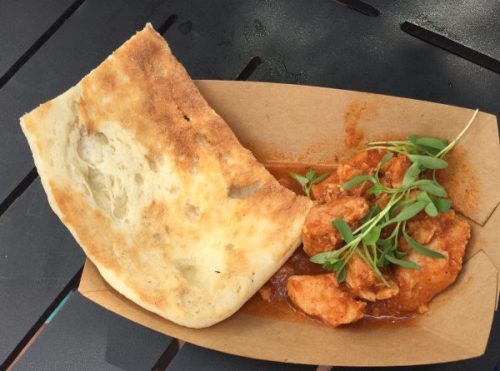 Maybe I’ve got Sanaa’s excellent preparation stuck in my mind, but I just wasn’t that impressed with Food & Wine’s rendition this year.

Or, maybe I ranked it too high last year?  I’m not sure.  The bottom line is that I felt there were thirteen better items on which I’d rather see you spend your money.

Yes, the beef was just a tad overdone this year.  Like The Chew’s skewer, however, I’m sure that Patagonia will get that sorted out. 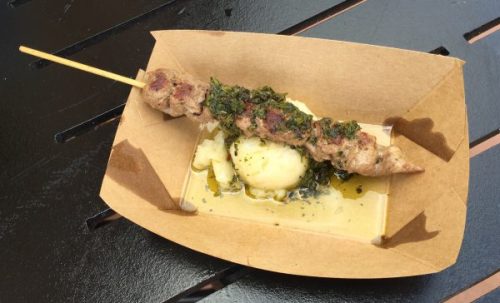 The redeeming part of this recipe is in its chimichurri sauce and potato purée.  That delicious medley is a combination that is impossible to ignore and hard to beat!

Mrs. All in WDW really hates it when I rank her beloved lamb chop this low.  I know.  I’ve said that before.

Truthfully, she thinks Australia’s marquee dish is the very best Epcot offers.  I think the potato “crunchies” give it great originality.  However, the texture of the lamb when it’s served this way just isn’t my “thing”.

The second of our “replacement” items, the flavor of this enchilada’s beef won it onto my menu of recommendations.

As I’ve said in the past, I’m not a huge fan of corn tortillas, but the spicy deliciousness of this item’s filling was undeniable.